do not rma your asus tablet in eu. a terrible experience.

I love recent Asus Android tablets. Even if they are not the cheapest, they possess terrific hardware characteristics. I decided to work hard and spare 716,80€ for the Transformer Prime TF201 (32GB model) and the corresponding dock. I bought it online on 2012-03-20. Although the GPS and the WiFi connections are not the best, I was a lot satisfied with the product itself. Unfortunately, about two weeks after the purchase, two issues appeared:

I’ve never dropped the tablet, nor it has ever fallen. As a student, 716,80€ are quite a lot of money and you surely know how much as a treasure I treated it. I even bought the official cover to protect the glass of the tablet. While I recognize that the first issue may happen just by using the tablet, I find outrageous that it happens after two weeks of usage. Regarding the second issue, well, I suspect of a firmware bug or something related to the dock circuits about the battery. Besides these two issues, the tablet was new and spotless.

Even if reluctant, I RMA’d the tablet and the dock, after I was reassured by Asus Italy customer service. They would have checked both the problems. Of course I tried to detail as much as possible the two issues. I even sent them that picture. Asus has a EU repair center located in Brno, Czech Republic. They received it on 2012-04-20. On 2012-04-23, the tablet appeared in the Repair Status Inquiry page of Asus. The status of the repairment was “Repairing”. Suddenly, around 2012-05-07, the status changed to “Waiting-[WF4] Wait for Customer Confirmation-CID\OOW”. Strictly speaking, it means “it was customer’s fault. He has to pay”. The billing proposal that I received was both awful and suspecting.

The repair center wants me to pay 204,60€. Yes, there are no mistakes. For a rubber detachment and a random drain of the battery, they want me to pay 204,60€. I had to options: either accept the proposal or refuse it and pay fixed costs (I think 35,00€ plus shipments). I chose the third option: to complain to Asus Italy customer service about a suspect of cheating. Guess what, besides the doubt of CID, the following are the two components that they want to substitute:

That is, for a rubber they want to change the whole LCD cover. For a draining battery, the want to change…the keyboard of the dock?!? Even worse, I should pay for everything.

I attach here the payment proposal, so you can see with your own eyes.

After my complain, I received a phone call from Asus Italy. The man on phone assured me that they would have investigate about this issue and call me back with explanations.

As of today, twenty days have passed and nobody contacted me. When I urged them to give me the explanations I was looking for, they reply was: “Dear Customer, you are not forced to accept the proposal.”.

Is this a honest way to treat a customer? I pointed them that the repair service looks suspicious, they do not care about that and just tell me that I can keep the un-repaired item.

This was my personal story with Asus (Italy). I waited more than one month before making it public. Now people must know. I will update this post if something new happens. My personal advice is: if you really want an Asus product in Europe buy it, but avoid to RMA it.

UPDATE: I desired to never come back to this post. However, the number of visits I receive, the numerous e-mails you are sending, and the temporary Google’s first page results when searching for “Asus garanzia” and “Asus garanzia tablet” (related to the post in Italian) bring me to write the sad conclusions of this event.

I decided to give in to this “blackmail” and pay the RMA. The tablet came back really fast. I could not trust Asus anymore. Therefore, I filmed the package opening. The following is the result - I only provide two screenshots: 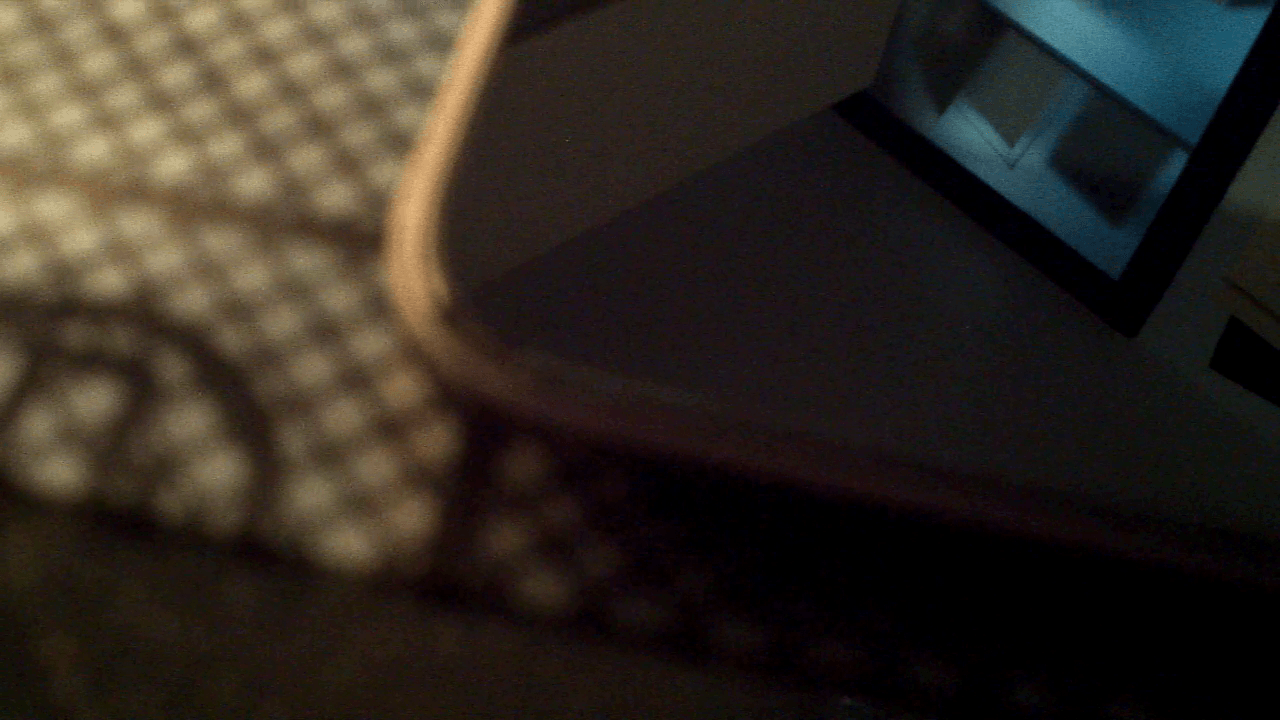 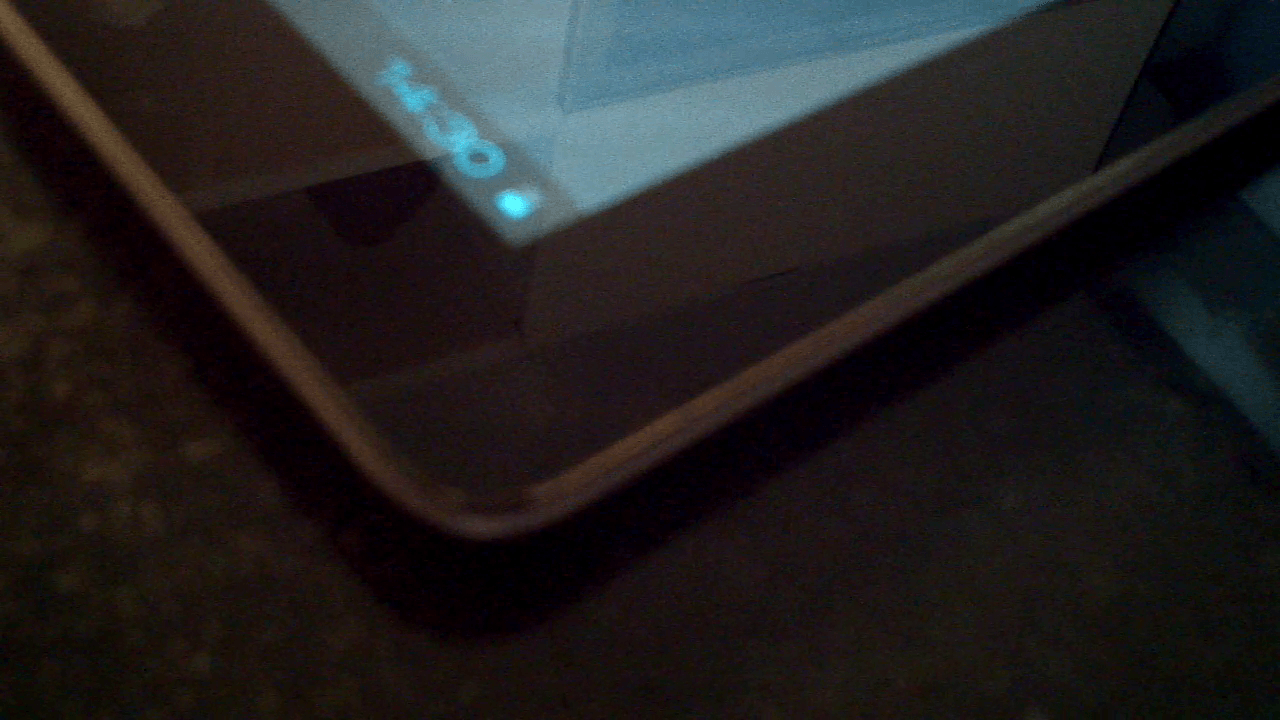 Wanna play Spot The Difference? Solution: no one. The tablet was returned with the same issues I described. Sure, they changed the components. However, the tablet came back looking exactly like before the RMA.

The worst part of this story? The RMA summary I received. 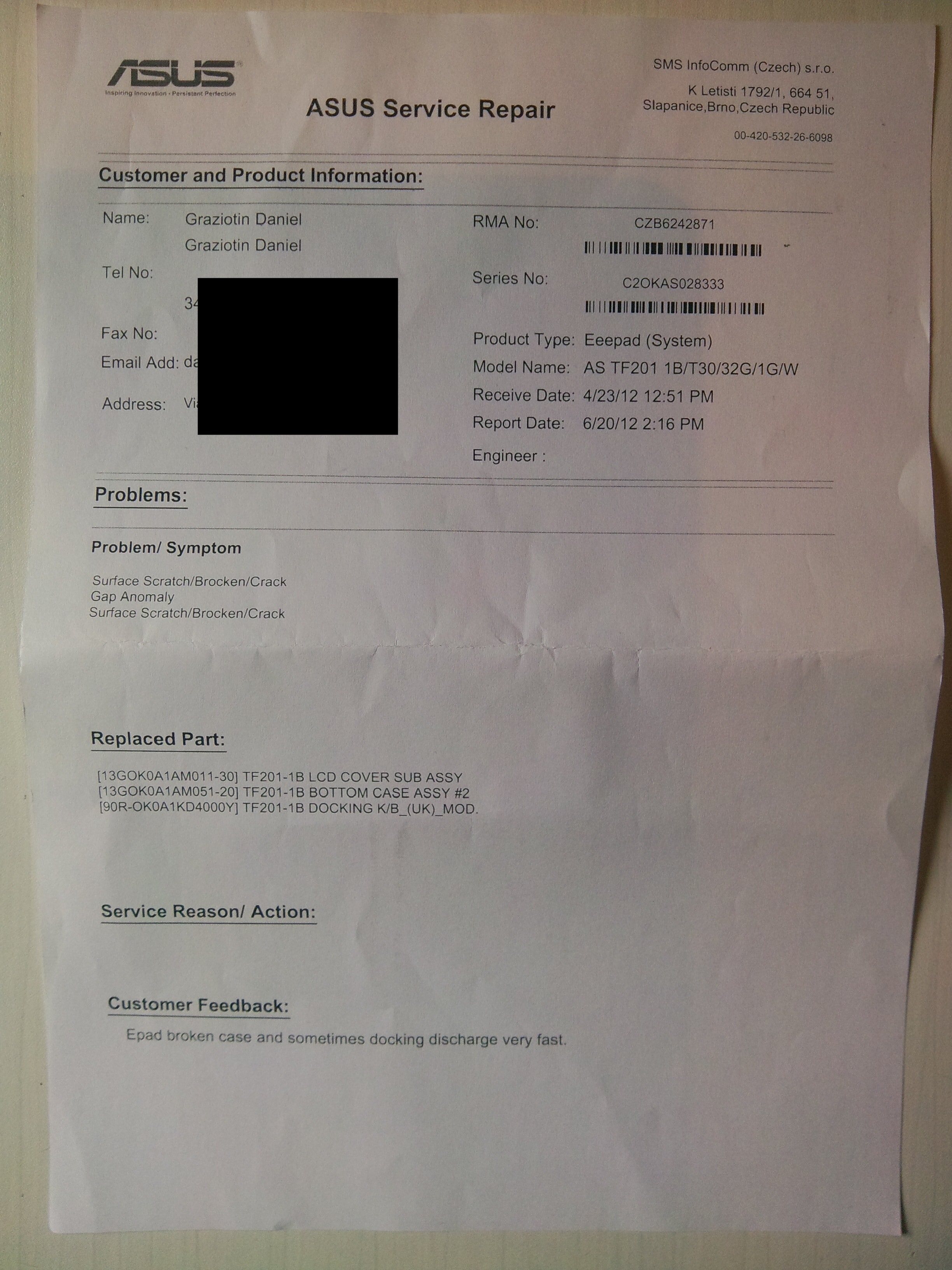 The RMA summary contains the following alleged statements that I would have communicated:

I have never told / said such things. The tickets and the phone calls always contained “rubber detachment” and “random battery drain of the dock with tablet turned off” keywords. And I sent them the pictures.

What they report - I do not know if it was written by the customer service or by the repair service - suggests to change the whole tablet “case”. Tablet “case” is a too much generic term. The same holds for “sometimes docking discharge very fast”.

I am sick of this behavior. I a couple of words, I paid 921,4€ for a two weeks usage of the tablet. I received another phone call by Asus shortly after I submitted their “anonymous” customer satisfaction survey in which I commented “SHAME ON YOU”. They invited me to send the tablet back to RMA. I refused and I decided to use the tablet up to when it will self-disassemble itseld because of the usage.

I will never buy an Asus product again.