if you can't beat ‘em..clean 'em. using imapfilter for remote rules to an imap mailbox

Software engineers receive tons of e-mails. Academics do, too. I am both. As several users do, I use inbox rules to flow my incoming messages. For example, e-mails concerning call for papers go straight to an inbox folder called CFP. E-mails related to editorial concerns go to a folder called EDITORIAL. E-mails sent to several distribution lists go to..the trash.

When using systems such as Gmail and Exchange, creating inbox rules (or filters) is rather simple. However, there are several scenarios in which server-side rules do not apply, nor would importing the e-mails to services such as Gmail. One could do client-side filtering, for example by creating rules in clients such as Apple.mail. However, what about a smartphone or a tablet? I wanted to have a way to simulate server-side mail filtering with rules so that e-mails on my Macbook Pro, my iPhone, and my iPad are synchronized and already processed when downloaded.

Turns out that somebody has thought about this issue. Imapfilter is indeed a console-based IMAP filtering system. The program connects to one or more IMAP server and processes the e-mails based on some rules. The following diagram conceptualizes the process (yes, I did it for testing the Apple Pencil): 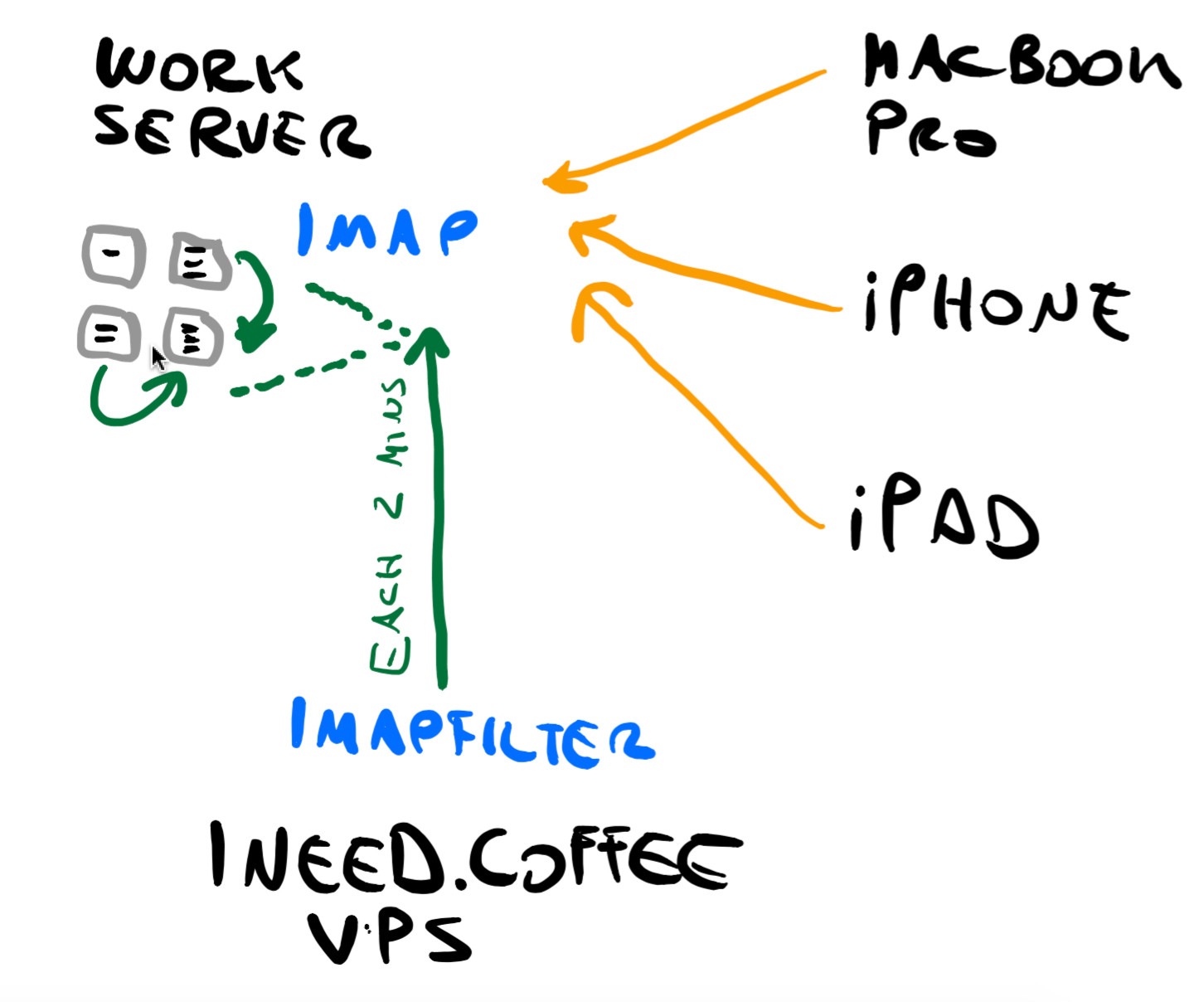 Each two minutes, the imapfilter connects to my work IMAP server, filters the e-mails according to my rules, and exits. Every 15 minutes, the e-mail clients on my devices download the mail. That is it. The system is not perfect, as it might rarely happen that the e-mails are downloaded before imapfilter processes them. However, they will get sorted out anyway at the next run. I am happy with it.

So this post is basically advertisement for imapfilter, as it made me much, much happy but it was not easy to find about it. Perhaps I was looking for wrong terms such as “serverless email filtering” or “cloud based email filter system”. Glad I found it. Imapfilter installation was just a matter of doing

Here is a reduced and anonymized version of my config.lua file:

For running imapfilter each two minutes, I created the file ~/bin/cleanimap.sh, which uses a PID file system to run imapfilter only when it is not running already (for sessions longer than two minutes).

Finally, for excuting the script each two minutes, I run the command crontab -e, and I added the following line.