A network can be categorized according to several criteria. Among them there are the type of transmission and the network scope. The internet (lower case) is a particular type of network, classified by its scope.

Three types of transmission technology are in use today, i.e., unicast, multicast, and broadcast.

Assume you have a sender system and a set of possible receivers, all of which can be potentially reached by the sender.

With unicast, there is a clear single receiver of the data you intend to transmit. This is also called point-to-point transmission. Unicast is a 1-to-1 transmission.

With multicast, there is a pre-defined set of possible receivers among all those which might receive data. Data is sent to all pre-defined receivers. Multicast is a 1-to-many transmission. Multicast could also cross subnets according to how it is configured.

With broadcast, data is transmitted to all those systems which can receive the data. Broadcast is confined within a subnet. It is a 1-to-all transmission.

There is also anycast, but that is a bit particular. Anycast works, in principle, like unicast, in the sense that there is a sender and a receiver (1-to-1). The difference is that the receiver is declared (or announced) in multiple parts of the Internet, so that traffic is routed to the nearest possible receiver (in terms of path). The operation is transparent to the sender.

Networks can vary in size and, simultaneously, can be parts of wider networks. So, we can classify networks in terms of their scope.

When you are in your room, say, in a student dormitory in Campus Vaihingen, and you transfer a picture from your smartphone to your computer via Bluetooth, you are operating at a minimal scale (smartphone to computer). We call networks like this one a PAN - personal area network. PANs are broadly defined to be within the personal scope, that is, over the range of one person. 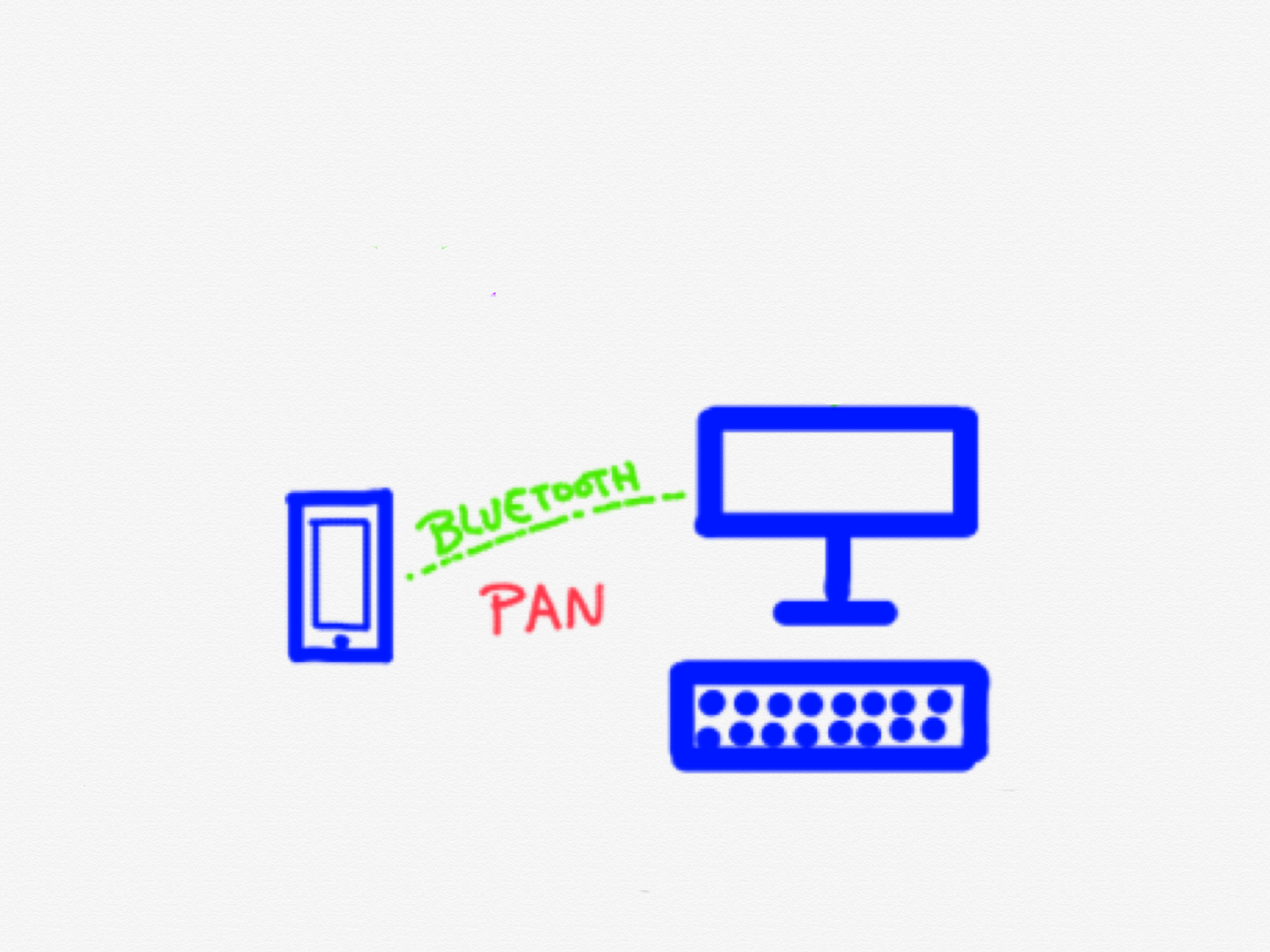 In your room in the dormitory, your computer might be connected via Ethernet (more likely via Wi-Fi now, but bear with me) directly “to the wall”. Or, assuming this was allowed, you might have connected an Ethernet switch to the wall, and your computer to the switch plus a printer.

Switches are computer devices that connect two or more transmission lines (cables). They are responsible to forward communication to the right recipient. This way, the computer can print via Ethernet. Some might call this system a PAN, but some will call it a tiny LAN - local area network. 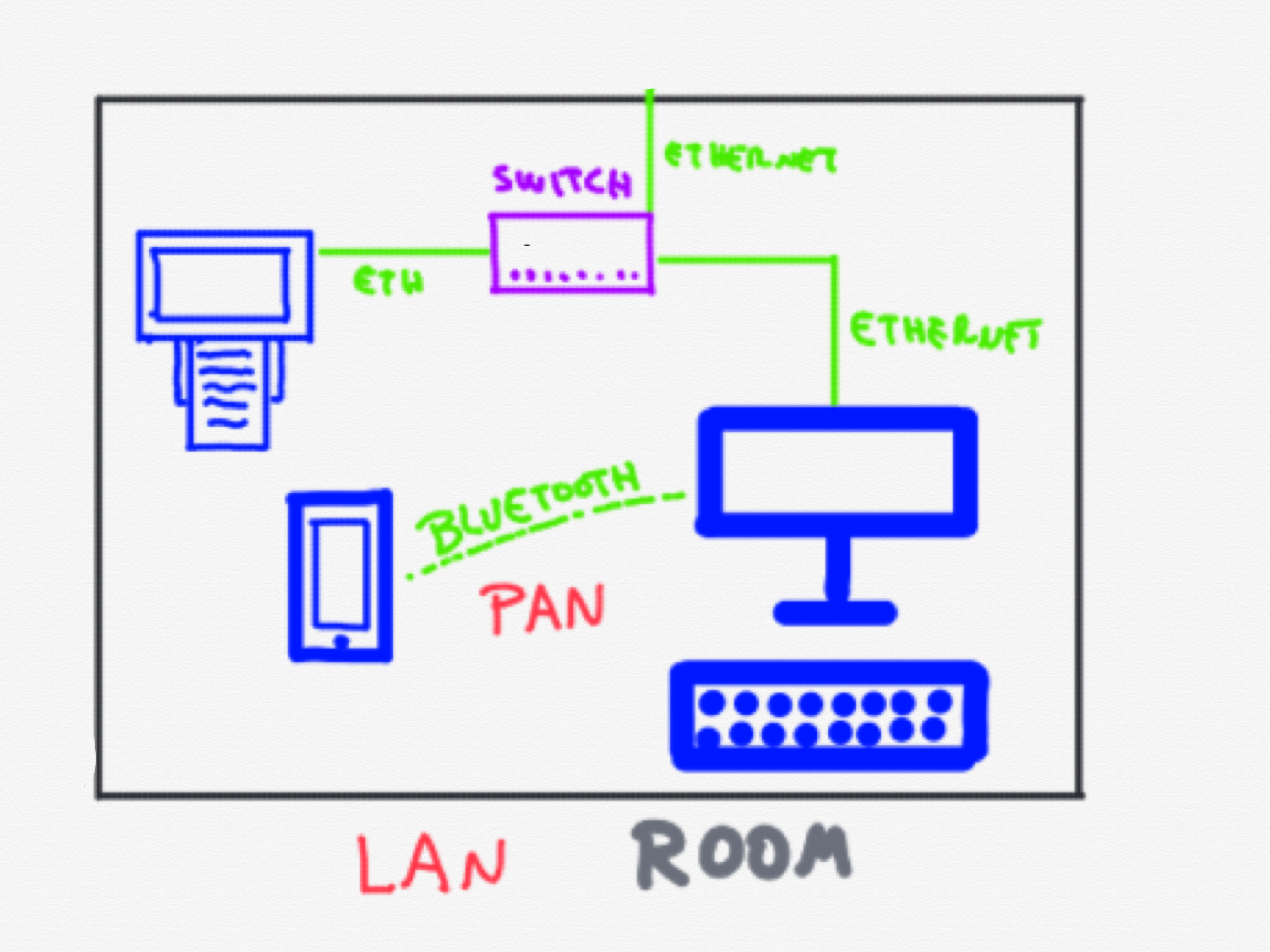 Your room is part of the dormitory, and in the dormitory there are other rooms, all of which contain other devices that are connected to your same network (with or without your ingenious switch). If we throw in Wi-Fi, in addition to computers and printers there might be smart speakers, smartphones, and whatnot. All these devices communicate over wire (with Ethernet) or wireless (with Wi-Fi), either with each other or with the external world. Your entire dormitory is a LAN, too, just a larger one. All cables (including Wi-Fi access points) are connected to a switch appliance, that I am calling building switch in the example below. This building switch allows all devices within the building to communicate with each other. This is the dormitory LAN. 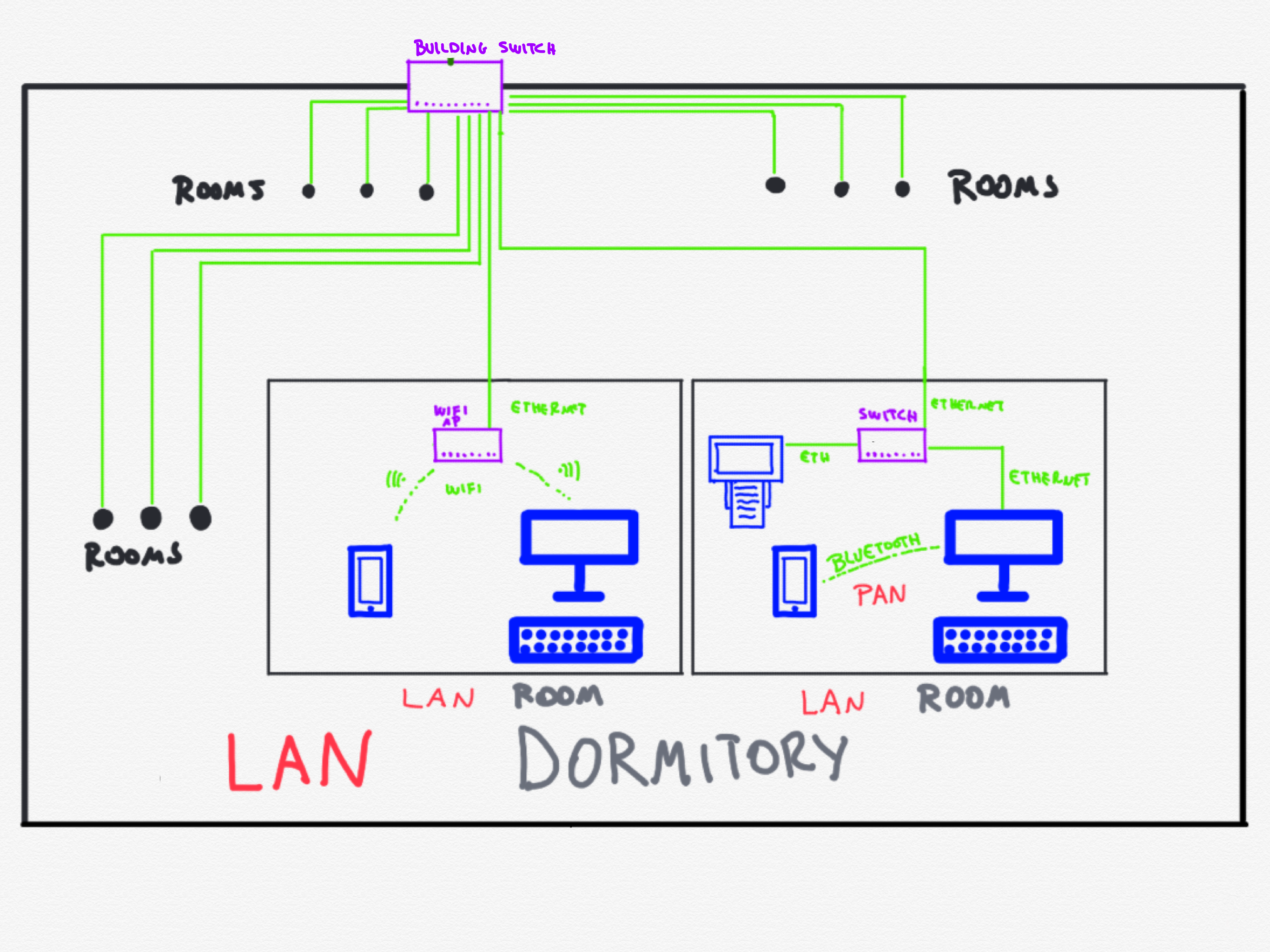 Example of independent LAN: your network at home when O2 tells you that there is no Internet for you today.

The dormitory you live in is connected, via cables, perhaps through the building switch, to some boxes that we assume terminate in the mysterious building of the IT crowd. The cables arrive at some junction boxes in there. Thing is, your dormitory is not the only building at Campus Vaihingen. There are other buildings, for example, the library, computer labs, lecture halls, and another dormitory. These building themselves have devices that are connected to their respective LANs. These LANs terminate in the building switches. The building switches, too, are connected to the junction box of the IT crowd building. Overall, this network has a scope of a (small) city, for the university, but you might see several that are as wide as a metropolitan area. We call this type of network MAN - metropolitan area network. 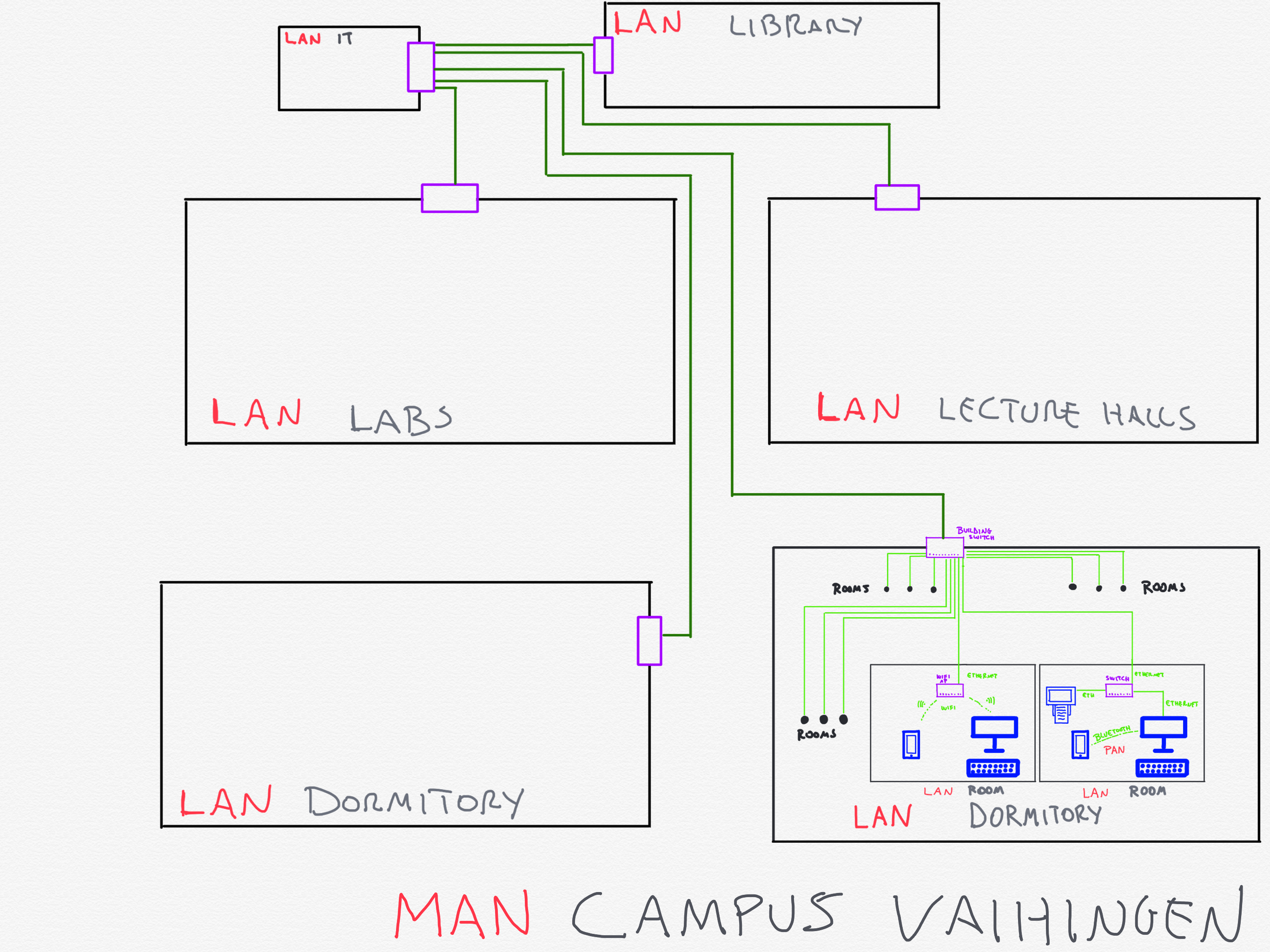 Example of independent MAN: cable TV, where an antenna distributes signal to many houses in a metropolitan area.

Of course, there is another campus in Stuttgart city center, which has settings similar to the ones in Vaihingen. LANs, buildings, all connected to their own IT crowd office junction box. This is another MAN. 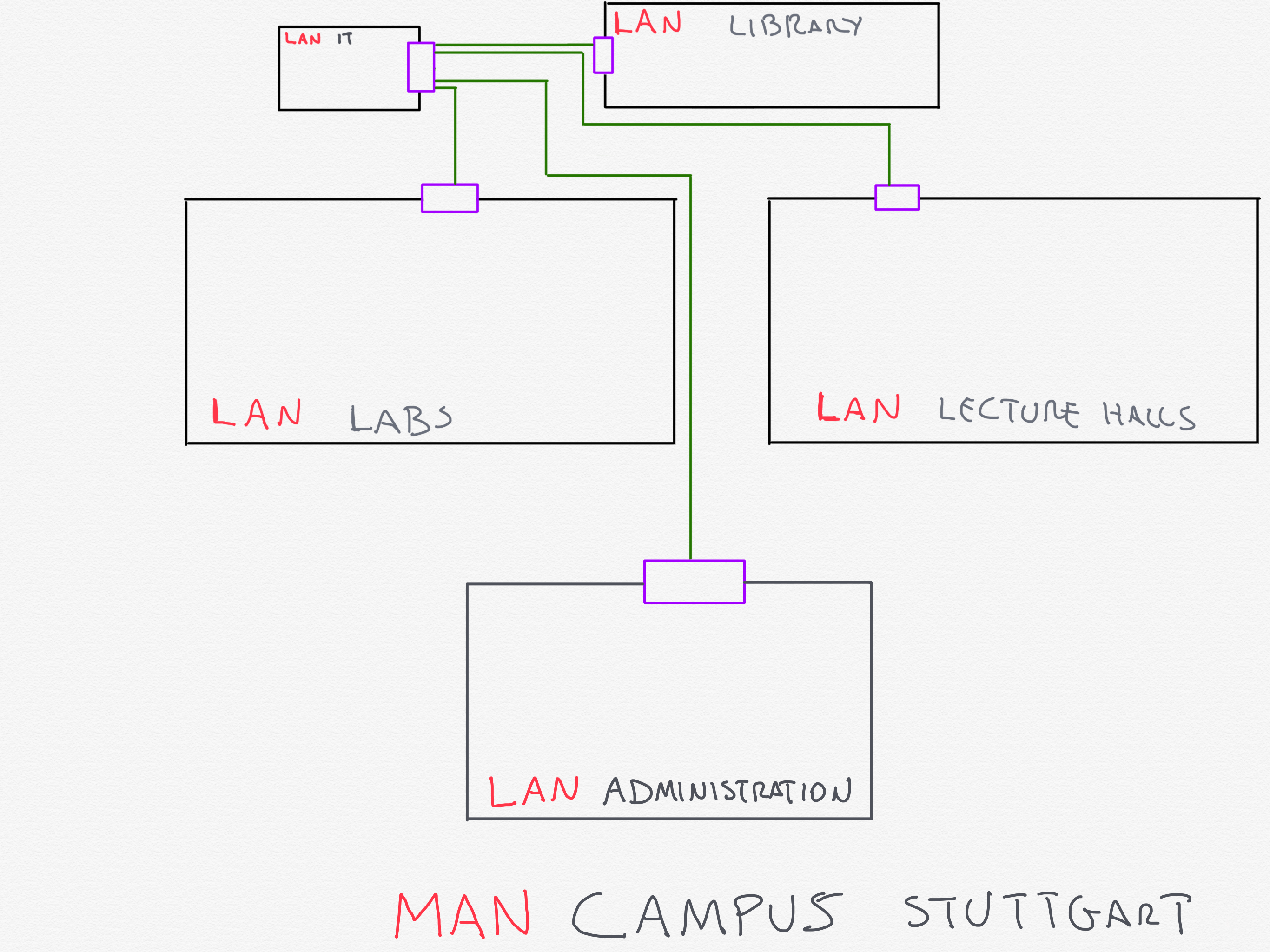 Suppose that, with a surprise pirate attack, the Land Baden-Württemberg conquers a part of Hamburg, the one where they have an excellent Faculty of Design, which me miss at our university. That is a third MAN. 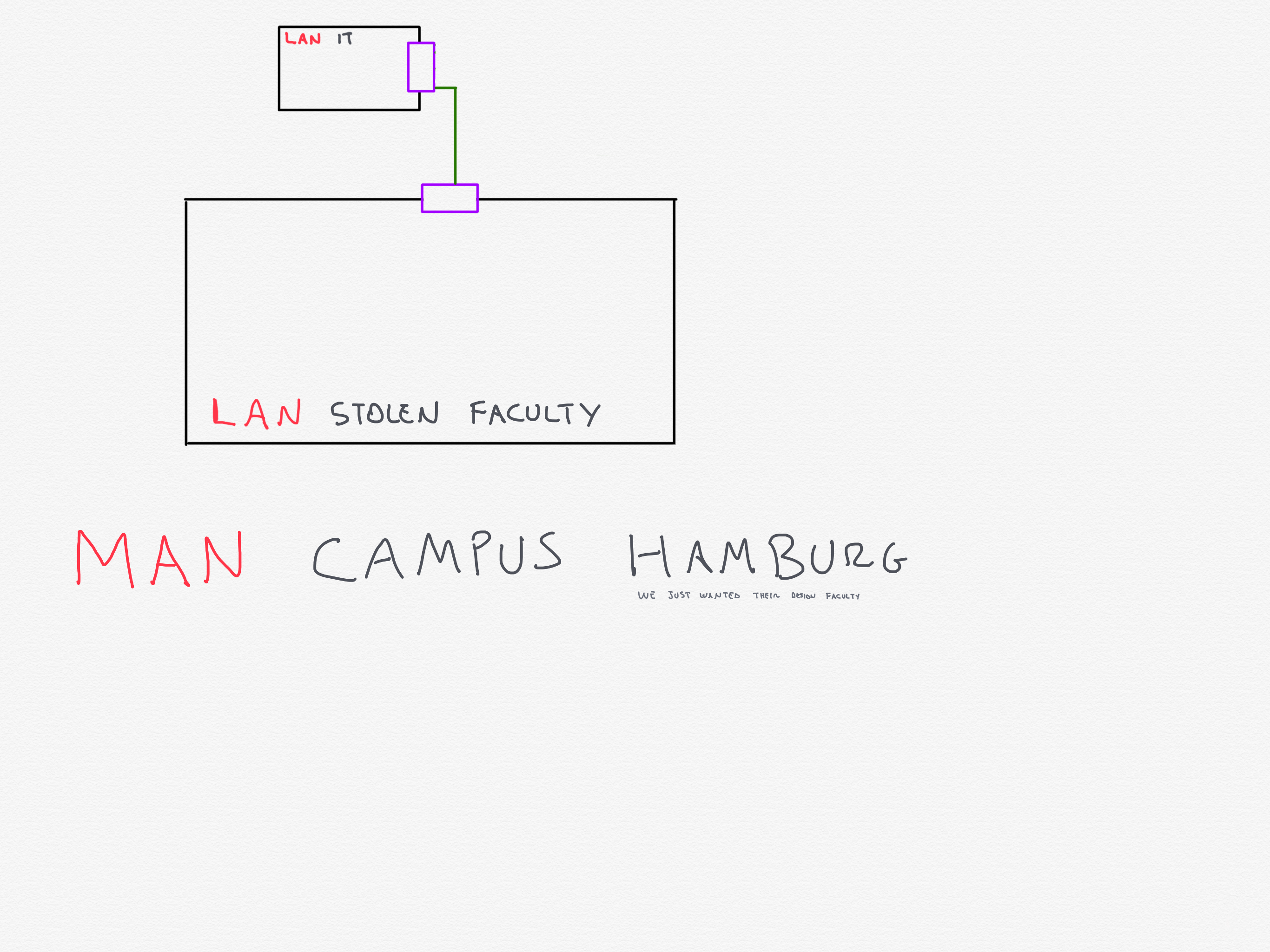 The junction boxes in Vaihingen and in Stuttgart are connected with underground high-speed fiber, meaning that the two MANs can communicate with each other, including any device connected at any level (building, room). Transmission lines are responsible for moving data between machines over networks. These can be wires or radio links.

As Hamburg was conquered later in the game, given the distance, the Land Baden-Württemberg cannot dig holes from Stuttgart to Hamburg to put new fiber cables. You might guess that putting down cables that spawn several kilometers in lengths is expensive, and you cannot have a set of cables for each company that wants a WAN, so what usually happens is that companies lease lines from specialized telecommunication companies. Baden-Württemberg decides to pay a third party, let’s say this is Deutsche Telekom, who already has cables in place. These cables are not a straight line to Hamburg. Cables from Stuttgart Campus arrive to a special device in Stuttgart city, called router. Router can also switch data, but they are also responsible to send and receive data that leaves and enters the network overall. From Stuttgart, transmission lines arrive to another router in Frankfurt. This path is owned by Deutsche Telekom. From Frankfurt, data goes to Kölln, same settings, but this time the path is owned by Vodafone. From Kölln, transmission lines arrive to Hamburg, and the path is owned by O2. So, the Land Baden-Württemberg pays all these providers to have a connected path from Campus Stuttgart to Campus Hamburg.

Baden-Württemberg then creates a network between the three MANs. The network is however virtual. Traffic that flows through this network is also encrypted so that it cannot be snooped when in transit from Stuttgart to Hamburg. This is called a VPN - virtual private network. That traffic from Hamburg to Campus Vaihingen goes through Campus Stuttgart (as Stuttgart is the one physically connected to Hamburg, not Vaihingen) is not even important. All that Campus Vaihingen sees is a connection from Campus Vaihingen to Campus Hamburg.

So, cables keep going and connect entire metropolitan areas together through exchange points (Frankfurt and Kölln). We call a network whose scope is wider than one of a city a WAN - wide area network. 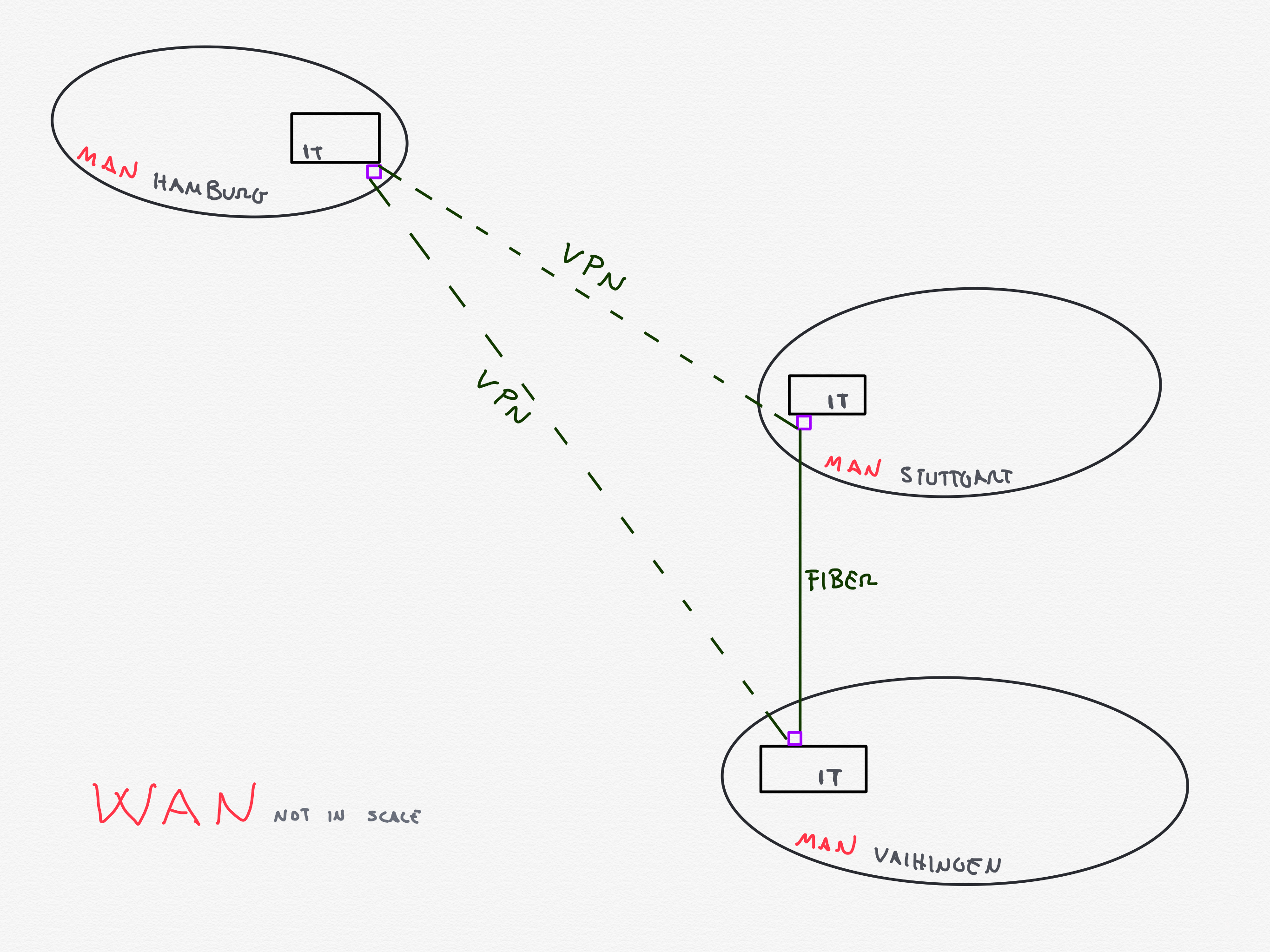 Example of independent WAN: a large enterprise entity that has got offices over a country, which are connected through a VPN.

Inside WANs, we start seeing elements of the Internet, that is, we have devices, named hosts, which are part of communication subnets (or sub-networks, networks that are limited in scope). Subnets consist of the two components of transmission lines (e.g., cables) and switching elements (e.g., switches), virtual or not.

Switches in the context of WANs are still specialized computers that connect more transmission lines. When data arrives at an incoming line, the switch has to choose the right outgoing line through which data gets forwarded, oftentimes outside the WAN itself. These switching computers are commonly called routers.

A WAN is not simply a large LAN. Here are three major differences between a LAN and a WAN:

A variation of a WAN is in its physical existence. Companies that are geographically distributed might lease dedicated transmission lines to build their own WAN, but another way is to go virtual. If the company decides to connect to the Internet through an internet service provider, the company can create its own WAN through a Virtual Private Network, or VPN. A VPN does what it says, it creates a virtual network between hosts, thus simulating transmission lines.

An ISP, as a provider, provides infrastructure for ensuring that your communication travels outside your network. Customers who connect to the ISP receive Internet service. ISPs that are of interest to us as private citizens (e.g., Deutsche Telekom, Vodafone, O2, …) are only a small subset to those that are available to companies and infrastructures.

In WANs, there are routers, switches, and transmission lines. When a router delivers data to a host withing its subnets, it uses a forwarding algorithm to do so. What happens if a router is requested to deliver data to a router that is outside its known WAN? The two routers begin to communicate indirectly, through intermediary routers. Different paths might exist to go from router A to router Z, and routing algorithms exist to take decisions according to different factors, including whether a path should be taken in case someone has paid for using it!

We arrive to the Internet..not, the internet, lowercase. An internet is a collection of interconnected networks. What allows you to visit a website that is hosted in Australia is a series of agreements between those who own infrastructure and lines of and between WANs, some of which are costly.

WANs can be internetworks (another name for internet, lowercase), as they will be connected to each other through transmission lines and routers. The Internet, uppercase, uses ISP networks to connect enterprise networks, home networks, and most other networks. Similar concepts, just not THE concept.

When I was a kid in the early 2000s, the difference between a LAN and the Internet was clear and demarcated. I had to connect my LAN to the service provider WAN, which in turn is connected to the rest of the Internet, using a dialup modem. Usage was billed per time spent connected, so trust me that I was aware when I was part of the Internet and when my LAN was..only a LAN.

So, what constitutes an internetwork? Is a LAN that connects to a WAN an internetwork? There is no official definition. The industry usually refers to an internetwork as interconnected networks, whose parts are maintained by different, independent organizations. A second definition is when heterogeneous networks (e.g., a wired one and a wireless one) are connected.

A router is a gateway which sits in a middle abstraction level to switch packets. This middle layer is called, you guessed it, network layer. But we will call it internet layer.